After Cornwall, Lynne and I went to the Scilly Isles for a week. Last year I spent a weekend on St Mary's but I spent both days at sea so I didn't get to know the islands at all. Lynne had always wanted to come to the Scillies. We went over by ferry. I had expected to do a lot of seawatching on the trip but the weather was cool and windy. I did spend some time on deck where I met some members of the Notts Bird club who had kindly agreed to let me go with them on one of their pelagic trips.

Naturally, you have to go everywhere by boat on the Scillies. This is good business for the boatmen. A simple return to any island is £7.80. If you want to visit two Islands on the same day it's about £11.50.

Now, I know there may be one or two of you who would like to see a picture of a small, cuddly baby seal, with that innocent looking face, the small snubby nose, the large appealing eyes, etc, but. . . 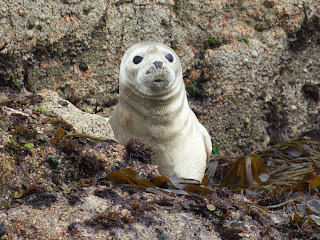 St Martins is one of the larger islands. The tides dictate where the boat drops you off and where it picks you up. We landed near one end of the island and were to be picked up near the other end. I liked St Martin's. The scenery was varied and the eastern end was fairly wild.

Shags are much more common than cormorant. Here's a shag feeding: 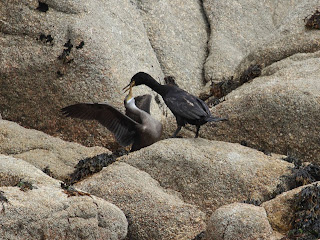 OK. But don't get your bill too far in, it makes me gag!: 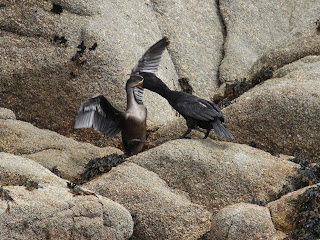 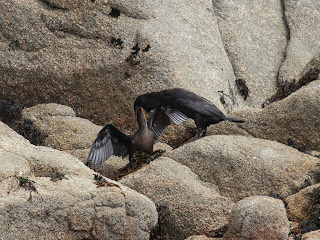 Here are a couple of cormorants: 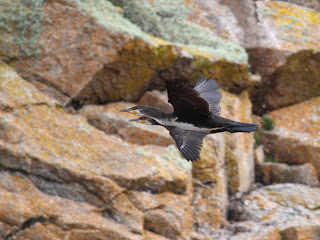 After a coffee at the local hotel we strode out to the other end of the island. We passed a field of linnets before arriving at Middletown at 1405. The local tea-room stopped selling lunch at 1400 and I got the blame for arriving late. We had another coffee and a nice piece of cake in lieu of lunch.

We walked to the far end of the island hoping to see some seabirds. We saw some gannets diving and also a basking shark. This also pleased Lynne, but she was now becoming uneasy about getting back in time to meet the boat. Lynne was not reassured by my reassurances. I had to cut short some photo opportunities for linnets, rock pipits, etc and we arrived back at the jetty half an hour before the boat was due to go.


Monday was quite misty. We decided to go to Tresco and looked round the formal gardens. These were quite nice but tranquility was shattered by the sound of a least two motor driven devices operated by workmen in the gardens. Sparrows were still feeding their young. 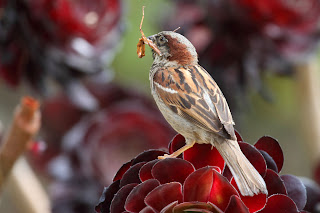 Further on we also saw a golden pheasant, clearly now part of a feral population!! 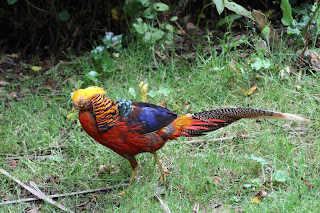 
Someone had recommended the fish and chips at the local pub on Tresco. We decided to have it. It was pricey at over £11 each but the portion was generous and we had difficulty eating it all.

On Tuesday we decided to stay on St Mary's. We walked through the old town, on to the end of the airport runway and then to Porth Hellick, a local nature reserve. There was a nice common sandpiper, a sedge Warbler and a distant kingfisher on a post. 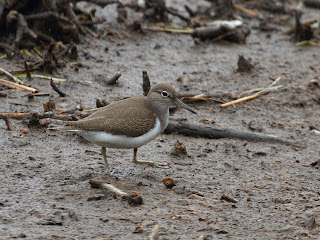 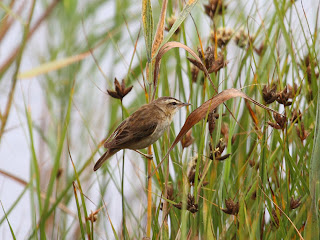 We walked on through another nature reserve to the heritage centre where I tried, not very successfully, to take pictures of swallows in flight. Just down the road was an interesting garden where some young blackbirds and thrushes came very near, not yet having learned to fear humans. 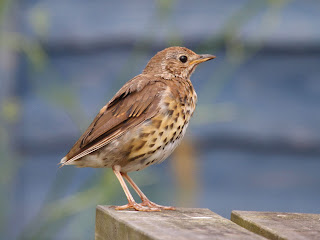 Song thrush waiting for his tail to grow.

On Wednesday we went to St Agnes. The Turk's head pub is about 200 m from the jetty, so the first thing we did was stop for coffee! Ambling on for a further half a mile we stopped near 'Big pool' which was supposed to be good for birds. It was actually quite small with only a few gulls on it. A little further around the island I came across 2 brown rats in a bush near the beach! 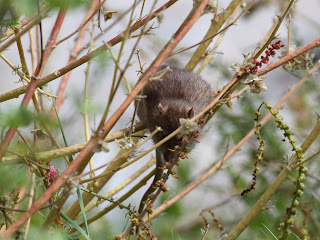 
There were also several willow warblers, presumably on migration: 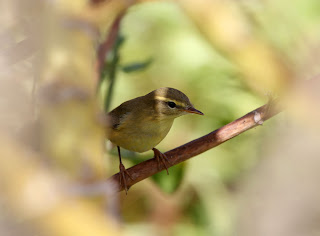 
From St Agnes at low tide it is possible to walk to the adjoining island of Gugh. There were hundreds of nesting pairs of lesser black backed gulls which didn't take kindly to our presence. We did see some rock pipits and some wheatears. The following sequence shows a bee approaching a wheatear, which ducks to get out of the way. 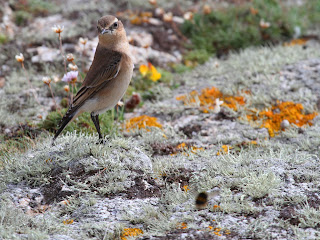 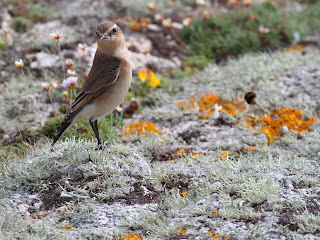 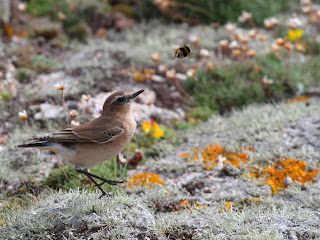 On Thursday we went to Bryher, one of the smaller islands. This probably had the fewest birds, but I did see a little egret on our approach to the jetty and, as we were leaving, a sandwich tern fishing, as the following pictures show. 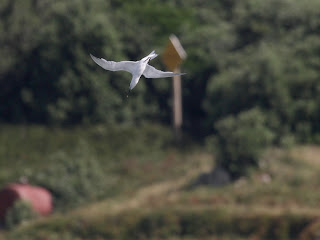 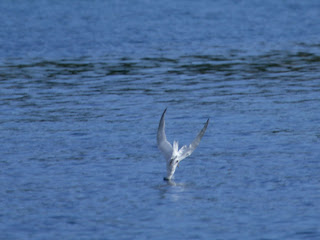 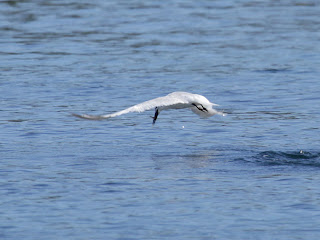 That evening, Lynne came with me on a short boat trip to see the Manx shearwaters amassing on the sea before they go ashore to their young. We saw 2 or 3 rafts of birds totalling perhaps 200 individuals, as well as a basking shark.

Friday was the day of the pelagic trip with the Notts bird club. Our guide told us that conditions were better than they had been all week. However, it was a little early in the season. The pelagic was very enjoyable even though sightings were limited. We saw a number of storm petrels, a sooty shearwater, a few Manx, one or 2 great skuas and the usual mix of gannets, gulls and fulmars. A highlight was a grey phalarope, a British tick! 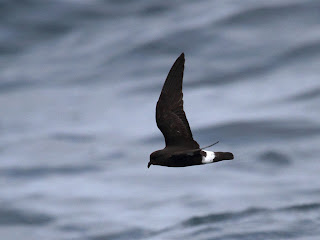 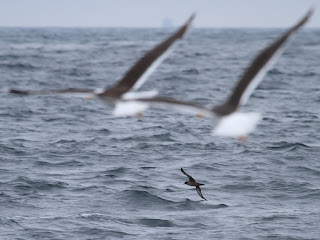 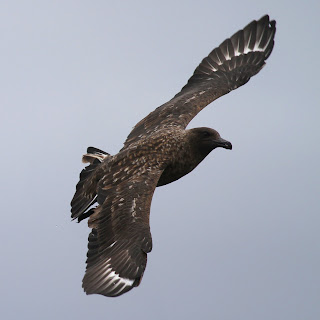 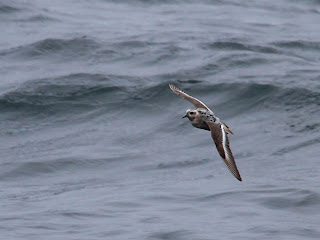 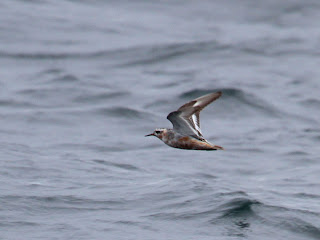 On the way back the gulls fought over the pieces of mackerell which the organisers threw overboard. I like this shot of a lesser black-backed gull getting the fish (lower right). 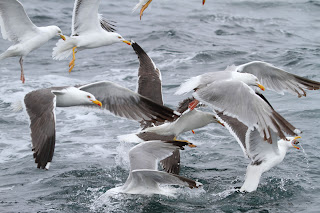 On Saturday morning we went to Porthloo on St Mary's, a very smelly beach. I don't know why. Lynne had a look round the small galleries and I scanned the beach for some reported Mediterranean gulls.

In the afternoon we left on the ferry. I spent some time on deck with the Notts Bird club and we saw a small number of petrels, several Manx shearwaters and a great skua. As we neared the Cornish coast 2 or 3 of us got onto a large shearwater with brown upper parts, darker brown wingtips and clear white underparts with dark fringes. I did not see the bill, but those who saw it agreed it was a Cory's shearwater, a lifer for me. My camera was in my rucksack unfortunately, but I'm sure it was a Cory's. The only other shearwater with upper parts like that is the great shearwater, but the bird we saw had no dark cap and no dark markings on the white underparts.

I don't want to give you the impression that this was purely a birdwatching holiday! We did a lot of walking, went to a singing concert of 5 local men singing sea songs, enjoyed innumerable coffee and cakes at various cafes, saw two glorious, but different, sunsets, and ate out at some of the local restaurants. Here are the 2 sunsets as well as Lynne and me just about to start our meal in 'the Boat Shed' restaurant, which was our favourite. 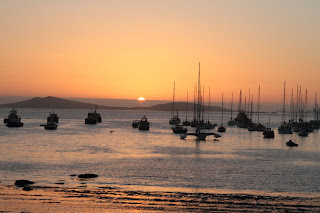 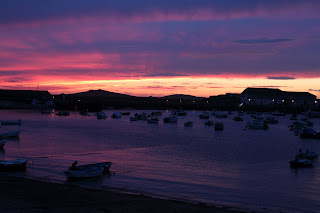 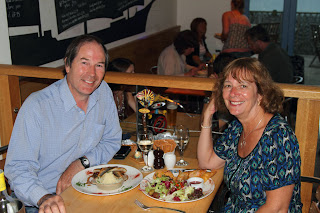 Me and Lynne at the 'Boatshed restaurant, St. Mary's.
Posted by Phil Wallace at 13:46