I was in Cornwall, Porthcurno, to sing in the chorus of 'The Bartered Bride', put on by Surrey Opera. The show was at the Minack open-air theatre in Porthcurno, the village near Lands End famous for being the point at which all the early telegraph / telephone cables entered the sea to go to America and, later, all over the world. The cables are now fibre-optic but they still go from Porthcurno. The telegraph museum is very interesting if you're down that way and the beach is very pretty. 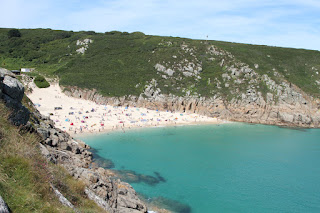 
The Minack theatre is fashioned with concrete out of the steep rocks of the south Cornish coast.  This shot was taken from the rocks at the point. 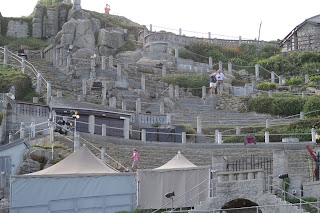 
We did 7 performances in 5 days but I did get a chance to do some birdwatching in the mornings some days!

Around the bay from Porthcurno is Logan's rock. I climbed round and spent most of my time watching a couple of rock pipits. 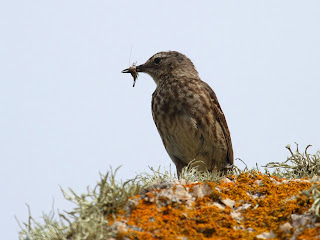 
A trip to Cot Valley yielded views of the two male choughs I had seen earlier in the year as well as a distant buzzard. 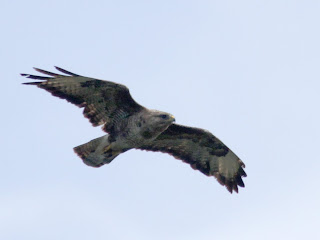 
On Friday I went to Porthgwarra watchpoint where there is an official seawatch for Balearic shearwaters, the rarest of the shearwaters. An almost all-day vigil is kept counting the number of Balearic shearwaters passing near the Runnelstone buoy situated 1.5km offshore. Some other birds are counted as well, notably Manx shearwaters and auks (puffins, guillemots, razorbills, etc).  I met John Swann, the local co-ordinator, and Russell Wynn from Southampton University who explained the purpose of the watch and the importance of the Runnelstone reef. Russell had some very useful tips for long-range identification of seabirds. Thank you both. I did see quite a few Manx shearwaters and one Balearic while I was there. Also several guillemots and one or two razorbills.

On Saturday, Lynne joined me and watched the final performance before we headed for Penzance to take the ferry to Scilly the next day. Watch this space for the next post.
Posted by Phil Wallace at 22:02