At the end of August, Birdguides was reporting some migrant birds in Spurn that I really wanted to see. David and I decided to go up for 3 days and stay at the Bird Observatory. The Observatory, the ‘Obs’ for short, is on the spot and is very reasonably priced. Spurn is a long, narrow peninsula at the mouth of the Humber river, East of Hull.  We booked for 3 nights from Tuesday 30 August 2022.

Before getting to Spurn, we decided to go for the Greater Sand Plover which had been at Redcar for several days. The plover was mobile, and could be anywhere at various points on a long stretch of beach. Luckily, it had been relocated recently, and the large group of birders on the beach left no doubt we had found the right place. This small wader originally hails from the Middle East. It was fairly distant but no problem with a good telescope. We watched it for 25-30 minutes before heading South again to Spurn.

On the way to Spurn, we passed over the North Yorkshire Moors. The high terrain looked good for Red Grouse, which I needed for my year list. We stopped and, within a few minutes, heard the call. Shortly afterwards, David spotted the grouse some distance away.

Back in the car, we continued South to Spurn.  A quick mini-supermarket shop was all that was needed before arriving at the obs. late afternoon.  We dropped everything off at the Obs., before heading down the road to where an Arctic Warbler had been seen.

Finding a small bird in the bushes is no easy task at the best of times, and we arrived in failing light. Birds are creatures of habit. We learned from those present that the Arctic Warbler came back to a particular tree, devoid of leaves inside. We sat down nearby to wait for it. About 20 minutes later we were rewarded with very close views of this small, unassuming passerine. Superficially, it looks like a Chiffchaff, but notice the large eye stripe.


The following day, Wednesday 31st, with a strong Easterly wind blowing seabirds towards us, we did some sea watching. Now, I am not very experienced at sea watching, which involves looking out for distant seabirds and identifying them at long range. David is much more experienced at this. The best bird was a Pomarine Skua, but we saw several Arctic Skuas, a couple of Great Skuas, as well as more common birds such as Gannets, Kittiwakes and Gulls.
Photography of these birds is almost impossible. For that reason, there are no pictures of them.

Later, we went to the wetlands. We looked for two reported Red-necked Phalaropes, but didn’t see them. There was, however, a Citrine Wagtail which, amazingly, I managed to see, but David did not. He was looking the other way at the time!

After lunch I went looking for a Red-backed Shrike nearby, but David returned to look for the Citrine Wagtail.

On arrival at the Shrike, I caught the merest glimpse of it before it disappeared for the afternoon. Not very satisfying.

Returning to the wetlands, we caught up with the two Red-necked Phalaropes.

There was also an obligingly close Ruff in the water very near us.
Later on, we caught up with the Citrine Wagtail, and we also enjoyed reasonable views of a Wryneck. Wrynecks are, technically, a type of woodpecker, and they can usually be seen for only a few weeks in the autumn while on migration.In the afternoon, we returned to the Nature Centre, where we looked for the Red-backed Shrike for more than an hour, seeing it only briefly, just as we were leaving!

The only pub on the peninsula is less than 100 metres from the obs, and we enjoyed dinner there, me with a glass or two of Sauvignon Blanc!

On Thursday, 1 September, we decided to walk to the end of the long, narrow Spurn Peninsula. This is a round trip of over 8 miles, about a quarter of it on sand, which is quite hard going. The other 75% is on various bits of tarmac path. Here is a view of the start of the walk. You can just see the end of the spit above the red car beyond where the lighthouse is. You may just be able to see it in the photo. It's further than it looks!

There is not one continuous path because the sea has eroded the spit in several places, causing the path to fall into the sea or onto the beach. Probably, in a few years, it will not be possible to walk to the end, as it will have been washed away.

While we were crossing the sandy section, we came across this young seal, which headed straight for the sea as we approached.

At the end of the peninsula there is a very small community. There is the RNLI lifeboat station, and also some communications buildings which appear to be staffed by those living there. Some of the houses are modern, and look very nice, but living there must be bleak indeed. It is just about possible to make the journey in a 4-wheel drive, but only 1 or 2 authorised vehicles are allowed.

At the very end, there is one of those mock signposts with the distances to various places, e.g. Sydney: 10,474 miles. Here I am, pointing aimlessly, and here is a selfie of David and me. 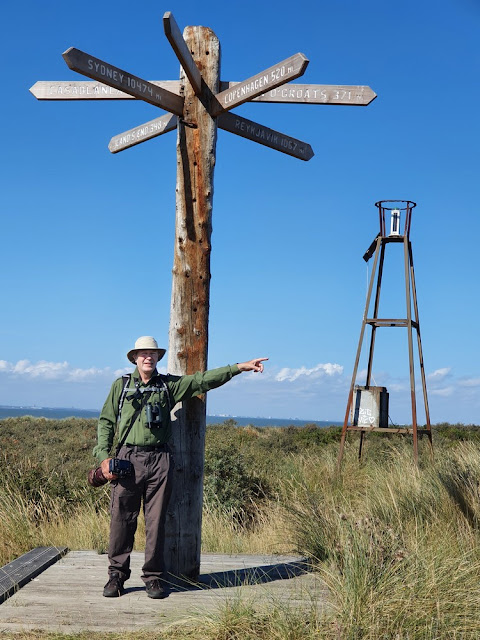 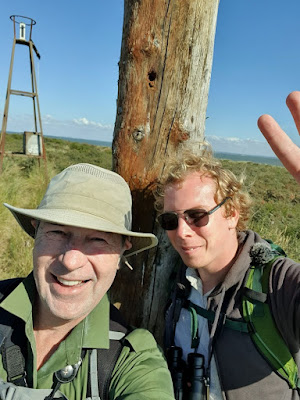 There were no especially rare bird sightings on this walk which was just a pleasant stroll lasting all morning.

On our return, we returned to the Wryneck for better views. We also heard of a very showy Wood Warbler nearby. I wasn't prepared for quite how obliging this bird was. It flitted around the tree, feeding, while 10 or 12 people stood very close nearby taking photos. Lovely!

Also nearby were several Whinchats. Here is one perched on a teasel.

The next day we headed home. All in all, a very enjoyable trip.

Posted by Phil Wallace at 18:16 No comments:

A Surfeit of Spotted Flycatchers

While out with David Campbell today looking for raptors (birds of prey), we came across at least a dozen Spotted Flycatchers. I saw four close together on the same fence. Good to see evidence of successful breeding this year.

Two days in the West

How better to deal with winter blues than to spend a couple of days away in the Westcountry watching birds? I went with Magnus Andersson, @Magnusphotog.

Our main target was the very rare Baikal Teal, a vagrant from East Asia which was at Greylake RSPB, in Somerset. Arriving at lunchtime, we met several people who had been there since 9.30 and not seen it. We searched for 90 minutes without locating it. As we were leaving, we passed a gate and Magnus suggested one more scan. He found the teal sitting under a bush. Fantastic! It was misty and the light was awful, so forgive the poor photo.

According to (my) tradition, seeing a lifer (a bird you have never seen before) warrants a celebratory Tunnock's caramel wafer! Said reward was duly consumed.

Next up were all three types of egret - Great White Egret, Little Egret and Cattle Egret.

We then looked for a Tundra Bean Goose. We eventually found it with a flock of Canada Geese.
Our last target of the day was the long-staying Penduline Tit at Weston-Super-Mare. We arrived 10 minutes too late and they had gone to roost. However we did see a wonderful starling murmuration at dusk, at which point it was getting dark so we headed for the Travelodge.

We had planned to go to WWT Slimbridge early the next morning but the frost and mist was persistent. We did find some Russian White-fronted Geese outside, before deciding to go first to a reservoir near Port Talbot to see the long-staying Pacific Diver!

At the Eglwys Nunydd Reservoir (don't ask me how to say that!) near Port Talbot, we managed to get onto the Pacific Diver. It looks a bit plain because it's not in breeding plumage, but it still looked majestic with its large bill and easy way of diving.
We also saw a Slavonian Grebe, which was too distant to photograph, and some lovely Goldeneye in flight and displaying. I hadn't realised that the females had an orange tip to the bill until I started doing the photos.


After walking round the reservoir and meeting on the way Rob Jones, @GlamBirder, the original finder of the diver, we headed back to Slimbridge. We arrived late, leaving us little time to go round. However, we did manage to see the Bewick's Swans. The locally reared Cranes, the Snow Geese and the Ross's Goose we saw were all of questionable provenance. I put them on my list but some purists might not!

We decided to stay another night and set off towards the Travelodge.

The final day was very windy and cold. We didn't bother with the Penduline Tits, as we didn't think they would come out in such weather. We dipped (birdwatcher-speak meaning 'missed') the Kentish Plover at Burham-on-sea and the long-staying Ring Ouzel, but we did catch up with the Glossy Ibis at Catcott Lows Nature Reserve and then the Whooper Swans at Curry Moor. The photos are not good enough to show here (I have my standards!).

To end, here are some distant shots of the Common Cranes at Slimbridge WWT.

In the main, we had a very enjoyable break.

Posted by Phil Wallace at 18:55 No comments:

This Glossy Ibis was elusive at Arundel Wildlife and Wetlands Trust reserve on 24 January.

It was nowhere to be seen on my arrival, so I took some photos of a showy Water Rail.

I had a sandwich and was about to leave. I decided to go back, and I'm glad I did. The Ibis flew in to the wader scrape as the light was fading.

Posted by Phil Wallace at 16:19 No comments: