After our 'not bad' visit to the New Forest, David and I decided to visit Norfolk, and also to try and see the river warbler which had turned up East of Norwich (i.e. a very long way from home).

The day started well with some distant stone curlews in a field near Weeting. A useful year tick.

On to Titchwell for the buff-breasted sandpiper. We saw a corn bunting (which I needed) on the way and we were confident. Too confident as it turned out. The buff-breasted sandpiper proved elusive and after 2 hours or so we decided to call it a day and look for Montagu's harriers at North Creake. That also proved fruitless so we headed for the river warbler. It didn't normally come out to play until 21.00 or 21.30 so it was almost dark when it did appear. It had been singing for quite a while before we saw it a few times flit from place to place in the reeds. Not a very satisfying twitch if I'm honest. We watched / listened to it on and off for about an hour before heading for home where we arrived shortly after 01.00.

At the end of the week I decided to go back to Norfolk. I retraced our steps except for the river warbler. At the stone curlew site I watched a common curlew for about half an hour from behind a bush and it came quite near. 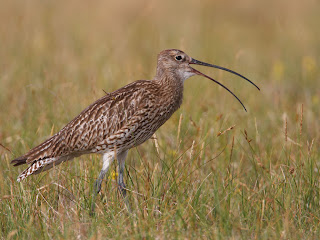 
On the way to Titchwell, a couple of miles from the coast, I heard a quail and saw it fly briefly. I tracked down the corn bunting and photographed it. 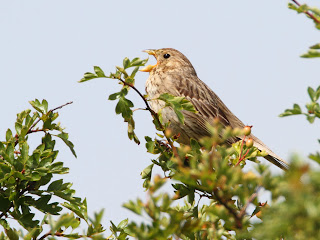 
At the reserve the buff-breasted sandpiper was more forthcoming and someone from the hide who had seen it came out to tell those on the bank where it was. Very distant but visible for quite a long time. 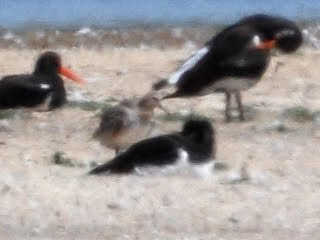 
While I was waiting I saw a spoonbill on the other side of the freshmarsh as well as 3 little terns.

I headed off to North Creake with a couple of guys I met at Titchwell. We weren't sure which site to watch from. There were warning signs at some of the most obvious gaps in the hedge but we found a site to the West which gave good views. Eventually, one of the guys spotted a harrier in the distance and we saw an unmistakable male Montagu's harrier as it came nearer but still distant. My record shot is not one I'm proud of but here it is: 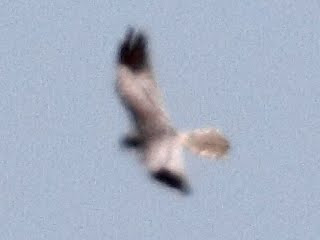 
We also saw a turtle dove fly nearby, another year tick.

I and one of the guys went to Swanton Novers in the hope of seeing a honey buzzard but no luck. A couple had been seen that day by a chap who visited Scandinavia a lot and had seen hundreds of them, but they are not breeding this year so their trips were less predictable as they had no need to find food for young.

After that I went back to North Creake hoping to get a better view of the Monty's. I met some others there including a couple of Americans and one of them pointed out a harrier not too far away which I didn't examine too closely while trying to get a picture. The general view was that we had seen a Monty's but later inspection of my photos revealed that it was in fact only a male marsh harrier. If any them reads this, I'm afraid it wasn't a Montagu's harrier, guys.
Posted by Phil Wallace at 20:59