It's always a pleasure to go to the Scilly Isles and this year was no exception. As an oasis of peace and tranquillity from the bustle of the Southeast, the Isles of Scilly are ideal. The islands are quiet with very little traffic. (you are not allowed to take your own car). Whilst it is true that small aircraft come and go now and again, the general feel of the place is of peace and relaxation.
There is also very little light pollution so after dark it is easy to see many more stars in the sky than in the South East of England.
2021 is the 4th consecutive year that four of us have travelled for the autumn migration. We go there because birds from other parts of the northern hemisphere sometimes appear. There can be several reasons for this but generally it works like this:
1   In the autumn many birds migrate, generally from the North to the South. They are on the move.
2   Now if there happens to be a major storm, they may get blown off course.
3   They may be blown over the Atlantic. That's quite a long way, they will probably be exhausted and they take every possible opportunity to land. The Isles of Scilly are about 50 km West of Land's End. Just the sort of land that some exhausted birds will be looking for.
Now, it follows that you really need a big storm to blow all the birds around in order to find some interesting vagrants. Unfortunately, there was no big storm prior to our visit this year so the number of unusual birds was definitely down. Sigh! You can't have everything. On the other hand, the weather was fabulous with sunshine every day for the whole week. Anyway, here are some of the birds that we saw, including some that are quite common and which most people will have seen or heard of.
WADERS
These are some of the waders we saw:

SMALL MIGRANTS
These are birds which migrate in Autumn, generally to Africa:

RAPTORS
One or two raptors which I managed to photograph:

RARE BIRDS
We did see some rare vagrants as well. Here are the ones I photographed:

Now, the up side of the dearth of rare birds was the glorious weather. Here is a typical scene of a palm tree and blue sea!
One day, we hired a four-seater electric golf buggy to get around St Mary's. With a top speed of 15mph, it was great fun. We were able to move around sites quickly and looking very superior as we passed other birdwatchers! this is what we had: 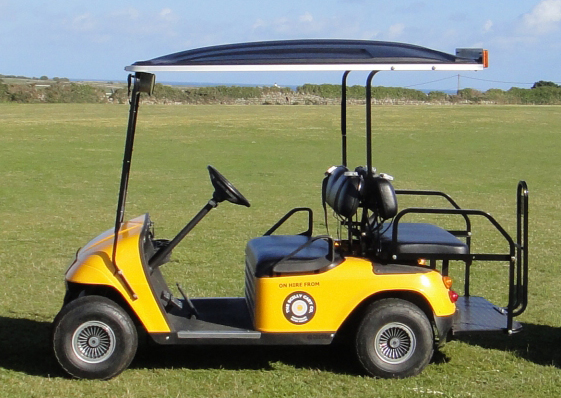 Now, I wouldn't want you to think we did nothing but look for birds! No, we had coffee at the Star Castle Hotel, had meals out some evenings and indulged in three cream teas! Sometimes we played on a swing. The others said I just never grew up, I don't know why.
Warning! This video (by Magnus Andersson) contains scenes of unbridled fun!

As the weather was so good, the ferry crossings on the Scillonian III were very calm too.
My total bird count was about 99 for the week.
Posted by Phil Wallace at 18:52 1 comment: