Next day it was time to take a sad leave of Koshi. A long drive to Chitwan nature reserve far to the West awaited us. The journey was uneventful except for the sight of some Himalayan griffon vultures eating a dead cow not far from the edge of the road. You can get some idea of the size of the vulture compared to the large-billed crow beside it. The crow is quite a large bird.
﻿
We arrived at Machan Paradise View Lodge in the evening for a 3-night stay.
﻿﻿ Before dinner we learned from a talk that the reserve was very extensive. There were about 140 wild tigers, over 400 wild rhinoceros and many other smaller mammals. Large areas of the park were covered with tall grasses but 90% of it is forest, made up largely of 'sal' trees. We were dismayed to hear that our chances of seeing a tiger were slim!

The Hindu festival of Holi was just starting as we arrived at Chitwan. Here are a couple of revellers.
﻿ We were also treated to local dancers. Lynne joined in the entertainment!
﻿

After a good night's sleep we were up before dawn for breakfast. As someone who doesn't like bananas I have breathtaking news!! I ate a banana pretty well every day in Nepal. After eating 2 bananas in Gambia 2 years ago, I started eating bananas for breakfast sliced on my porridge (yes, porridge is big in Nepal). To prove it, here is me eating, and obviously enjoying, a banana!


﻿ After breakfast we were straight inside the park acting as bait for tigers! Well, that's what it felt like at times, but we lived to tell the tale. Only once or twice did the spotter ask us to move rapidly away from some movement he wasn't happy with! He had a stout stick with him which I thought might not be much good against a tiger. On talking to him, however, I learned that the stick was not to beat the tiger but to beat the ground in order to make a noise that frightens tigers. I hoped he was right!
﻿
There are quite a number of 'babblers' in Nepal. Here are some of the ones we saw:﻿﻿﻿

﻿﻿
Everyone likes a bee-eater. Here are two that we saw at Chitwan:
﻿  Most of the grassland birds were small and distant I'm afraid:
﻿﻿﻿

Although not a grass bird, this Chestnut-bellied nuthatch was the one that looked most like our nuthatch.
﻿
Mid-day was generally hot and the others slept while yours truly wandered around in search of other avian rarities. One of the ground staff pointed out this bat roost in one of the bushes just a few metres from our room.
﻿
The camp and Chitwan were home to several species of parakeet. I know they look like ours, but they are much more colourful.
﻿
In addition, there were 3 types of myna bird. Here are 2 of them:
﻿ While at Chitwan we enjoyed an elephant ride one afternoon. The elephants generally work with one keeper/driver. In India they are called 'mahouts' but in Nepal the drivers are called 'phanits'. A phanit would be very offended if you called him a 'mahout' who, in Nepal, is really just one who cleans out the elephants' stables.
﻿ Most (perhaps all) safari elephants are female. Females are calmer. Ours was 45 years old.

To get on and off the elephant we climbed up a specially constructed wooden tower. The elephant backed into it. We them scrambled onto it's back one by one.

When we tipped Ram at the end, he had taught his elephant to take the notes with her trunk and deliver them to her master. You can just see them in this picture.


﻿We saw several rhinoceroses and crocodiles in the park. Here's a rhino:
﻿﻿ The crocodiles are called 'marsh muggers' and grow to several metres long. I wouldn't like to meet one if I wasn't on top of an elephant!
﻿ Although not a problem for us, insects abound in this part of the world. The hotel had a huge hornets' nest on the side of the main building and the bridge over the river sported four of them:
﻿
We took a jeep safari for a whole day, mainly in search of birds, but it was on this trip that Will suddenly shouted 'tiger' as he saw one cross the track a couple of hundred metres ahead. By the time we had reached the point where it had crossed, we were just able to see it disappear into the forest. No photo but it's true, honest!

We saw many skulking forest birds as well, including a bird which you may recognise! It's the original ancestor of our own domestic chicken, the red jungle fowl. It's completely wild in Chitwan.

﻿ We also saw the charismatic and beautiful Indian roller.

﻿
On the way back from our day trip to the forest we witnessed another eerie event. From the forest track we saw a large sambar deer. It wasn't far from us and was looking intently away from us, staring at something, completely motionless. Normally a deer would look at you and flee, but not this one. We scanned the area beyond the deer and I thought I saw the black tips of the ears of a tiger amongst the grasses! So did Suchit! The deer stood motionless and it's only acknowledgement of our presence was the turn of a single ear in our direction. After what seemed like an age the deer suddenly flew like the wind away to one side while letting out a deafening bellow. It had escaped and the tiger melted away.

We took several walks in the forest at Chitwan. On one walk we met this cheery group of women on their way to work. Women don't like having their picture taken but they agreed to be photographed with Barbara.

﻿
Woodpeckers abounded in this forest. There were three similar species of flameback woodpecker. In order they are: black rumped flameback (more common), Himalyan flameback (rarer) and greater flameback (rarest). Eventually we saw all three (we saw the first one at Koshi). The difference lies in how thick and dark the eye-stripe is. The rarest has the thickest, darkest eye-stripe. I'll let you work out which is which. (but I've made it easy for you). The second picture shows particularly well why they're called 'flameback'! 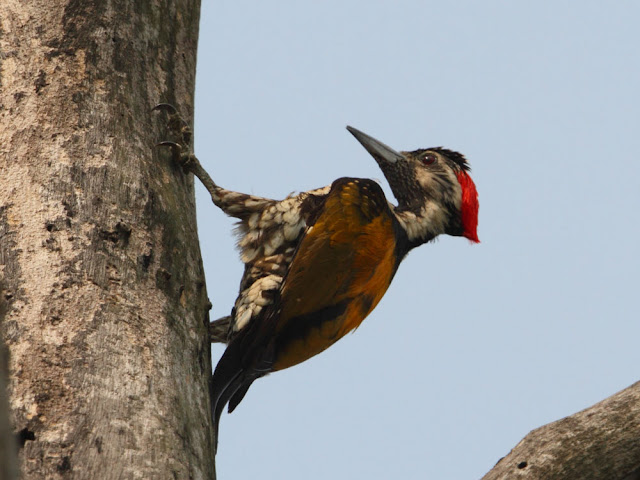 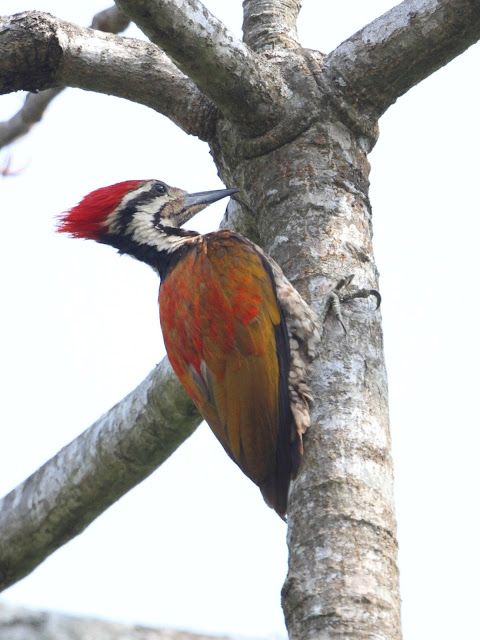 Another river trip rounded off our stay in Chitwan. Near the river, this woolly-necked stork waded in the shallows.
﻿
This river trip made me realise how many races (or variations) of pied wagtail there are.

All good stopovers come to an end, and soon it was time to drive to Nepal's second city, Pokhara.

PHOTO SIZES - What do you prefer?

In this blog post I'm experimenting with larger photos. I've put in several sizes of this shikra (like our sparrowhawk) giving a lizard a lift!  The normal default size is this:
﻿
﻿
﻿