Our holiday in with Birdfinders during the last two weeks of March  was a small group and we met Will at Heathrow when he recognised our yellow luggage tags. Getting to Nepal involved a 7½ -hour overnight flight from to , a three hour stopover followed by a short 1½ hour flight to . Strangely, is 5½ hours ahead of us and is 5¾ hours ahead!


Anyway, we got to Kathmandu at about 7 PM which was about 1.15 in the afternoon in . I never really sleep on planes. I prefer an aisle seat so I can get up every hour or so and walk up and down.


ur guide, Suchit Basnet, met us at the airport and took us to our hotel. We also met Barbara, a charming Canadian, who was the fourth member of our party. After arranging to meet Suchit the following morning, we had a light dinner and went straight to bed.


Birdwatching holidays always involve getting up very early and this one was no exception. A call at 05.30 followed by a quick breakfast saw us on the road by 06.30 heading towards Phulchowky, a ‘hill’ near . Anything lower than 6000m in is a hill!


Although I had been to for a few days when I was a student, I had this idea that it was a completely mountainous country and that it would, therefore, be very cold. There are a lot of mountains, but most of the population live in the plains where, because of the latitude, the climate is tropical. We enjoyed temperatures of 25 – 28° C and sometimes into the early 30s. Suchit told us that even in December the temperature in the lowlands is around 25° C.


From the van we took in the essentials of . The roads were basic and not always complete. Some were very wide but only the centre third was paved. There were many, many motorcycles on the roads. Traffic was chaotic. There seemed to be no rules at all! Traffic drove more or less on the left, as in , but there the similarities ended! No-one used their indicators. A car or motor-bike would just turn right in front of you without warning and you just had to stop!  On the other hand, the overall speed of traffic was low so drivers could stop quickly.

A great deal of trade obviously took place in the streets which were bustling with people. It was very interesting.


﻿
﻿
﻿ The mains wiring was also very interesting. This pole was typical:

﻿
﻿ The city was in the process of widening the roads. Problem was that many owners had built out beyond the building line in breach of the planning laws. This meant that the front part of many buildings had to be chopped off leaving some buildings with ugly scars or the front of the building exposed. The streets were also littered with piles of rubble from the buildings that had been partially demolished. You can imagine how dusty it all was.


Transport by scooter or motor-bike was fascinating. On any 2-seater you might have two people: 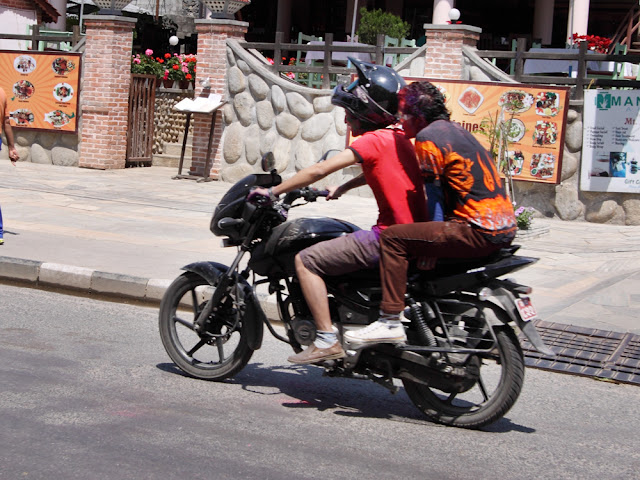 Or two and a half: 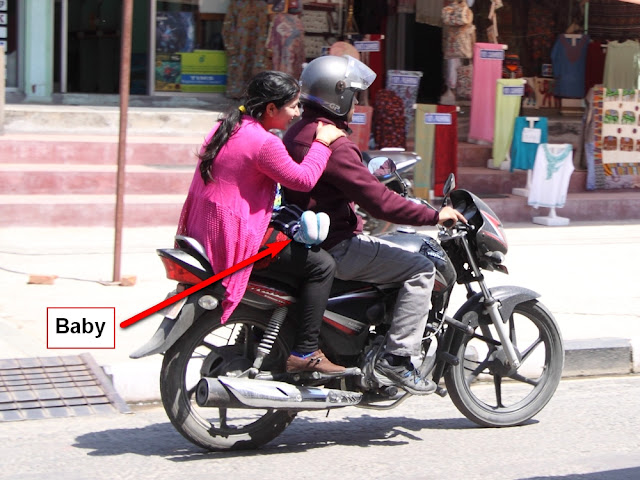 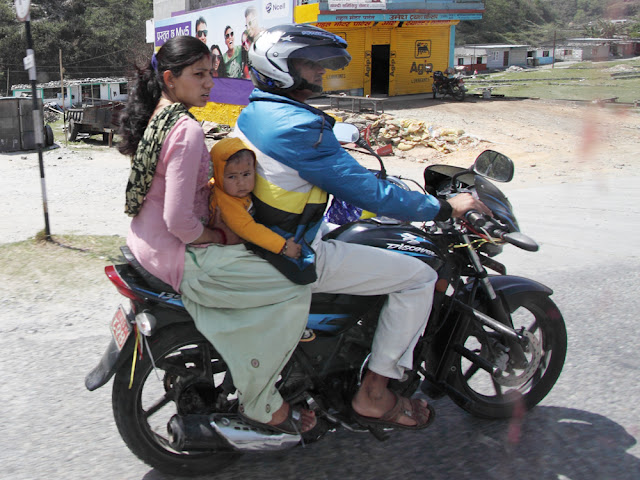 our on a motor-bike: 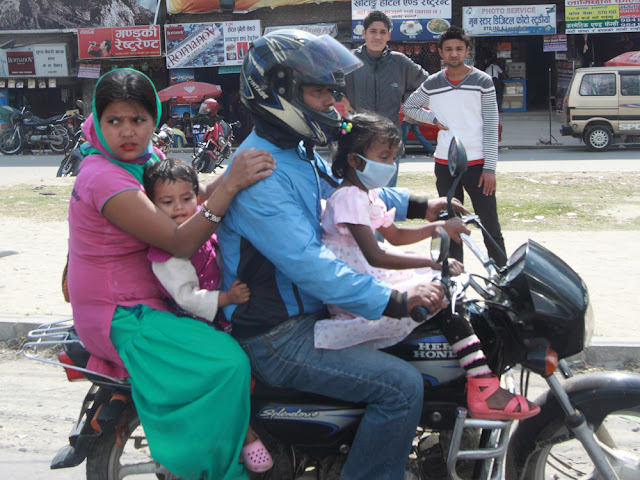 or even on a scooter: 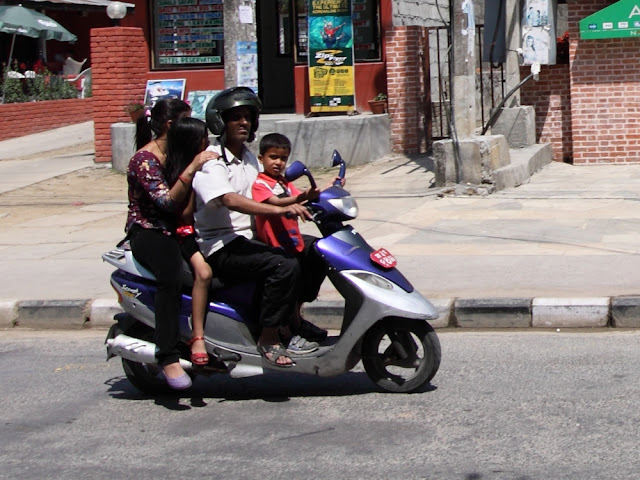 Five?  No, that would just be silly!

On this particular outing to Phulchowky we picked up a policeman for protection. This surprised me and was mildly unsettling, but Suchit said there had been one or two incidents of muggings in the past and they didn't want to take any chances. We soon got into the swing of things. Because we haven't really been East before, many of the birds were completely new to us. While travelling through the most common birds were house sparrows, tree sparrows (yes we do have those) house crow and black kite. In Phulchowky we started with blue throated barbets, great barbets, whistling thrush, minivets, etc.

﻿
﻿ I snapped away with my camera and tried to make a note of the birds we saw. I knew something from previous experience; that if I didn't keep a note of the species I photographed I would get back home and start trawling through a few thousand photographs, forgetting which species they were. This would involve some very time-consuming consultation of the book. After a short while Lynne started making notes of the species we saw. In the lulls I read from the camera the time that I photographed each species. This would make it easy to match up photos with the names.
﻿
﻿﻿
﻿ On the next trip I resolved to take a small voice recorder with me that I can hang round my neck. This will make taking notes even quicker.


Suchit proved to be a very experienced guide who spoke excellent English. Our two companions were also most amiable and it was clear that the trip was going to be very pleasant.

We made our way back to Kathmandu. After dinner we packed our cases, ready for the flight to Koshi the next morning.