The 4 chicks born to the peregrine falcons on the roof of Quadrant House, Sutton are in the news. They're on the front page of the Sutton Guardian this week.

On Friday, 2 of the chicks were trying out their wings while running along the parapet but the adults weren't taking much notice. They were doing the same today:

Today, the adults were more active, flying round the building and calling to encourage the chicks. This shot shows the parents. The male is on the left. He's considerably smaller than the female but the angle of this shot doesn't show the female at her full size.
﻿
Here is the female in flight to encourage the chicks. They didn't all hatch at the same time (because the eggs were not all laid at the same time) so only the first ones to hatch are nearly ready to fly. The others will take a few days longer.


At one point both adults went after a pigeon. The chase was very exciting for about 200 metres before the pigeon got away by plummetting into a tree!

Later the male caught a small bird (perhaps a sparrow) and dropped it to the female without landing: 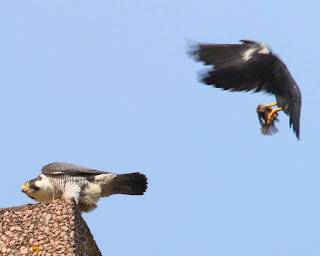 I'll keep you posted as the young birds fledge. Watch this space!
Posted by Phil Wallace at 19:51