My first reaction on hearing the news of a Marmora's warbler in Blaenavon, Gwent was: "What's a Marmora's warbler?" Oops. Showing my ignorance again. The next question was: Should I go for it? The first day news was a bit dodgy. 'Probable', 'mobile' and 'elusive' are not words you want to hear when contemplating a 165 mile journey to see a bird. The second day reports were more encouraging so I decided to go yesterday, Sat 5 June.

I left early and arrived easily and found the car park (that lonely road on the moor is actually in Google street view). There were probably 200-300 people there already. No sooner had I got to the spot than the bird emerged unexpectedly from a bush at the side of the road and flew in front of my face a couple of metres away! It was a while before it reappeared so, in the meantime, I enjoyed the other birds. There were several cuckoos, one being mobbed by tree pipits (both year ticks), willow warbler, meadow pipits, whinchat, etc. 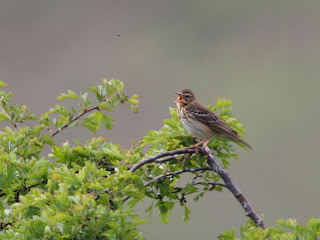 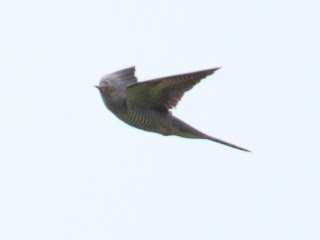 
After twenty minutes, the Marmora's warbler reappeared causing a surge. It favoured a wall on the North of the road which was good from the point of view of light. I managed shots from about 100m and the bird is small. Nevertheless, you can clearly make out the Dartford warbler look, the orange legs, red eye, black tip to bill and plain breast. It was singing away most of the time. Lovely. 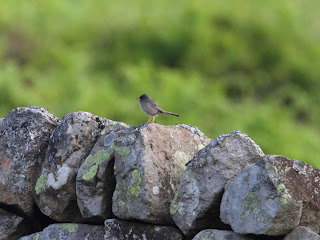 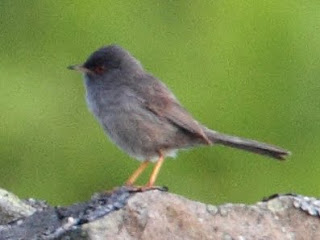 
Marmora's warblers normally live on Mediterranean islands such as Corsica and Sardinia. The last record in the UK was about ten years ago. After about an hour it was still only nine o'clock. I spoke to some guys from Essex who told me the Forest of Dean was very nice, especially for goshawks displaying in the Spring. It was too late for that but it was on my way home so I went to have a look. I was sure to be able to get a drink at the RSPB visitor centre!

On arrival at the Nag's Head, sorry I mean Nagshead RSPB, the visitor centre was very spartan with no facilities at all except for toilets. They had solar panels for electricity but they were not working so there were no lights. The volunteers were very helpful and, hearing that I'd been up since 5 o'clock, they gave me a coffee from their own personal flask. Thanks very much to the Harrisons (I think they were so called). That was very kind. I was gasping.

The Forest of Dean is gorgeous. It's a large area of mature woodland, ideal for pied flycatcher and wood warbler. On my way to the lower hide I heard a family of treecreepers. They were very mobile and light levels (photographically speaking) were very low in the wood. I had to up the ISO to 1600 most of the time and this does affect the quality of the photos. I know some people say modern cameras are good to 1600 and even to 3200 but I notice a distinct graininess even over 400. 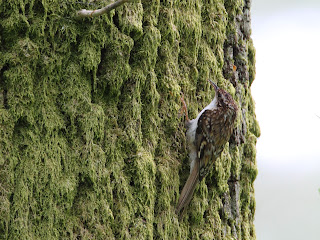 
The hide was a very old fashioned one from 1986 with very narrow slits only about 180mm high. I had a job looking out and I only just managed to get my lens through the opening. There was a nice spotted flycatcher nearby and a nuthatch also came to the same tree. 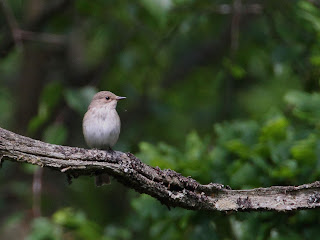 
Even though I applied -1.3 stops of exposure compensation, the pale bird in sunlight is still overexposed. -2 would probably have been right for a small pale bird with the dark trees around.

I then had to find a pied flycathcer and wood warbler. According to the volunteer, pied flycatcher should be relatively common in the wood. It was simply a case of finding a nesting box with them in it. Returning birdwatchers, however, reported that all the nesting boxes seemed to be occupied by tits. I found a point where I could watch three nesting boxes at the same time. The middle one did have pied flycatchers in. The guys from Essex appeared at that moment and so did the wood warbler which proved to be very mobile and elusive. 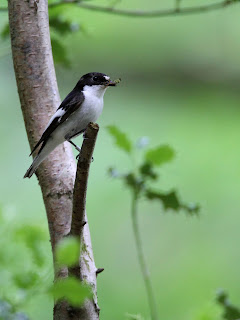 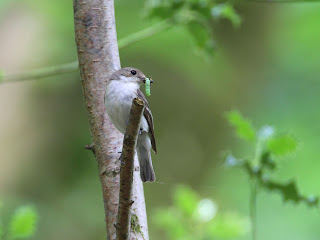 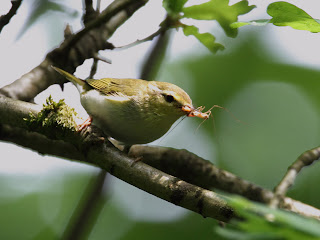 
On my way home I stopped off at Highnam Wood to see if there were any nightingales. The nature trail was good, but I found no nightingales. I met the Harrisons again, checking nesting boxes. They'd finished their shift at Nagshead and they'd been to a wedding in between!! That's efficient use of time.

Time to go home and look at the photos.
Posted by Phil Wallace at 22:00