Having failed by 10 minutes to see the Banstead red-backed shrike, I went to Richmond Park yesterday, sunday, where a male had been reported, 'walk West from Sheen car park'. West from Sheen car park the land didn't look right. There were no bushes and small trees in open terrain or fences that shrikes like. I wouldn't have found the spot except for meeting someone who had just seen it and was going home. It was in a large hawthorn tree where it had been for about an hour. Would it come out?

Dog walkers went very near. A mallard landed on the improbably small pond only a few metres in diameter. We sat on a nearby tussock and waited. Then the bird was spotted. I took a few photos and watched the shrike for a while. I had only brought my smaller lens. Even though it would take half an hour to go back to the car for my 500mm I decided it would be worth it. When I got back the shrike was still there. Hid behind a bush and got some shots of it sitting in wait, but not actually catching anything. A nice trip to the park. 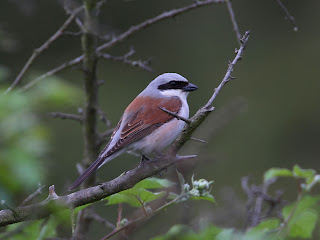