Part 1 - Kitulgala and Sinharaja
In Part 1:  Is this the longest tail of any flycatcher? and lots of pictures

This winter's bird trip was to Sri Lanka with Limosa holidays. I had not previously been with the company, but I found the trip reasonably priced and well organised. I went with my friend David Campbell, who was making his first foray outside Europe.

The overnight flight was direct to Colombo. I think I prefer a long direct flight rather than a stopover in the Middle East. I managed to watch several films so the flight wasn't too bad. 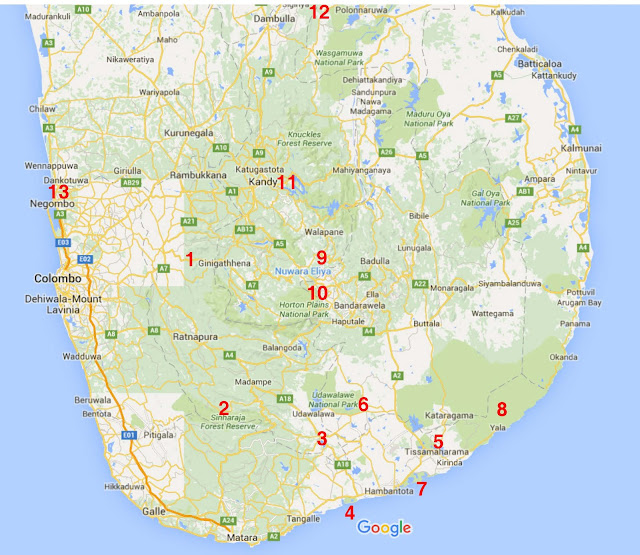 The difference from early February British weather to the 33° C plus humidity of Sri Lanka was breathtaking. For the first couple of days the heat was almost unbearable. This was exacerbated because our first port of call, the beautifully positioned Kitulgala Rest House, had no air conditioning. The lodge was situated high above a medium-sized river and surrounded by rainforest. There were many notices and photographs alerting guests to the fact that Kitulgala was where much of the action in  "The Bridge over the River Kwai" was filmed. We spent two nights here.

I decided early on that, as far as possible, I would eat the local food rather than the western offerings. This proved to be a good move. Although I had one or two days with the runs, I never had a stomach upset during the whole trip.

Unlike me, David had clearly done his bird homework by reading the field guide from cover to cover. I rarely give the birds more than a cursory look before any trip. I never have a list of birds that I must see. I take my camera and I see what I can. That often means what is pointed out to me, or what I see on my own. I suppose I'm more of a photographer than a true birder.

I had been to Nepal in 2013 and I thought that some of the birds would be the same. Nevertheless, the difference in latitude was enough to ensure that there was a good choice of new birds. For David virtually everything was new apart from some of the waders.

One of the endemic species is the Sri Lanka hanging parrot. This is a small parrot with almost no tail. We never saw it hanging upside down, but it gets its name from the fact that it sleeps upside down when roosting. Here are some of the birds we saw at Kitulgala.

Sinharaja – Blue Magpie Lodge – 2 nights.
From Kitulgala we made quite a long journey to Blue Magpie Lodge. The roads in Sri Lanka are quite good. The road surface is generally good but the roads in the hills are very winding. We arrived in time for a late lunch in the restaurant overlooking fields and a marsh. This produced a new set of birds as well as a few familiar ones.


Whilst there, we visited the Sinharaja Reserve home of many leeches. Now, we all had leech socks. These go over normal socks and over trousers, fastening above the knee.

The close weave of the material stops leeches from getting through. What they don’t tell you is that leeches also drop on you from the bushes above! I was lucky and didn’t get a leech. David found one attaching itself to his stomach within a few minutes of arriving at the park! Initially, they look very small and thin, hardly noticeable. When they’ve had your blood they drop off of their own accord. By then they’re as fat as slugs.

Gary, our Limosa leader, 'acquired' a leech while not wearing his leech socks. He then put them on over the leech later in the day. When he took them off that evening, the fat leech had already had enough and fallen off inside his sock!

We also saw other insects, snakes, invertebrates, lizards, etc. Here are some of them:

For other parts:
Part 2 - Embilipitiya and Tissamaharama
(Kingfishers fall out. What's the wingspan of a fruit bat?)