I've just been on a pelagic trip to see birds that don't normally come to land except for breeding. The true masters of the waves, who use every small upward movement of the waves to help them fly. Pelagic means: 'of the open sea'.

I went by train to Penzance and then helicopter to St. Mary's. Got what must be almost the only bus on St Mary's. He dropped me right at the door of my B&B. I asked the owner where I could see birds then, as it was still early. He took me to the kitchen of the local restaurant at the back of the B&B. The owner was a keen bird photographer and gave me the number of a taxi and told me to go for the marsh sandpiper that had been seen at Porth Hellick. I rang it and the driver was also a keen birdwatcher who took me to the reserve with another elderly couple. The man told me he had been to the Scillies twice a year for the last 46 years!! This was my first visit! Would I get hooked, I thought.
The marsh sandpiper was worth the trip. A lifer for me. It's on the right in the photo below. Much finer bill than the greenshanks with it. 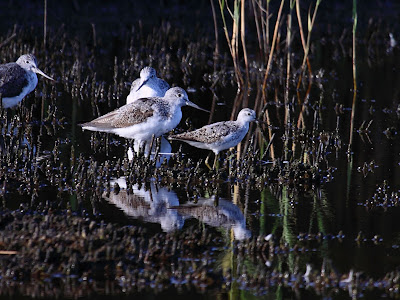 Next day at 0700 hrs we left for the 'pelagic' on the 'Sapphire III'. I wondered what had happened to I and II! The boat was modern and quiet. with plenty of seating. There was no cover, but I had my wide brimmed hat. We were 25 in total, of whom only three were women. Yes, birdwatching is still a largely male pursuit! I was apprehensive about being the whole day at sea in case I was sick, but I needn't have worried. Bob Flood announced that there wasn't as much wind as the birds like but he hoped we would still see some interesting ones.

While we chugged out to sea, Bob and his colleagues set about making the 'chum', a mixture of bread, fish oil and fish which attracts the tubenoses (fulmars, shearwaters, petrels) which use smell as a means to find food. The bread floats and attracts gulls which follow the boat in great numbers, giving a visual clue to other birds with good eyesight that food is around. We saw good numbers of herring, lesser black-backed and great black-backed gulls, common terns, fulmars and even some gannets following us.

Some of the birds which followed the boat. L to R: fulmar, lesser black-backed gull, great shearwater, great black-backed gull (on water) with probably juvenile, herring gull. Not sure what the flying juvenile is - probably a GBBG. Anybody?

Once out at sea within the first two hours we saw all the new birds for me. Storm petrels were quite common. We also saw a few Wilson's petrels, which are much rarer. The record shots below are the best of a couple of hundred. Storm petrels remind one of swallows, darting over the waves. They are small and rarely come close, and when they do it's hard to follow their fast, erratic flight. Wilson's are slightly less erratic in flight. The differences are that Wilson's are larger, their white rump goes round underneath, their legs are longer and stick out beyond their tail and they fly more slowly and often hover over the waves. 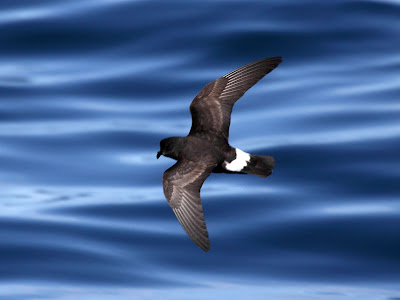 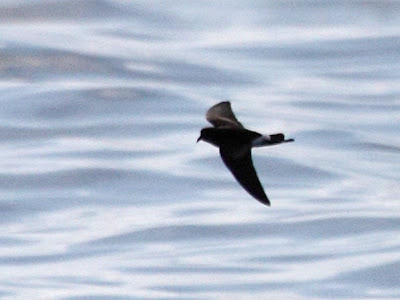 
During the voyage, the crew set up rods to catch shark and also fished using rods with four hooks. This was amazingly effective. He would lower the line into the sea for about a minute and when he pulled it up there were four mackerel attached!! These fish were kept until later when they were chopped up and thrown overboard slowly to attract other birds.

It wasn't long before we saw the first great shearwater. This was a very cheeky bird that flew straight in to take some of the fish being thrown overboard from under the noses of even the largest gulls. They're certainly fearless birds, often making off with a titbit followed by more than one gull. Then there were two or three, but never more than that. 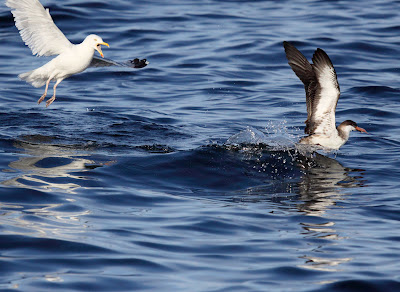 Hey! Come back with that fish!! Great shearwater pursued by a great black-backed gull. 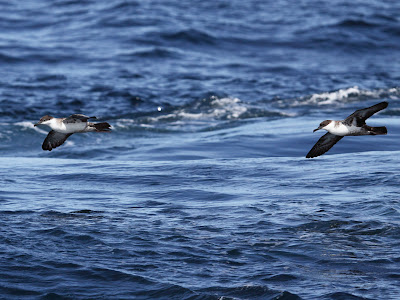 Great shearwaters, masters of the air.

There wasn't much wind and the shearwaters were having to work hard to keep airbourne. A sooty tern appeared in a group of birds behind a trawler. Another lifer. We saw a distant Manx shearwater, not a lifer but lovely. 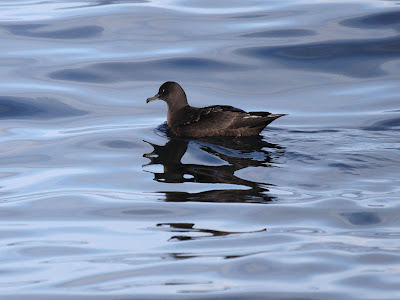 The wind picked up slightly and we hoped we might see a Cory's or Balearic shearwater, but no luck. We spent the rest of the day watching the one or two great shearwaters that were with us for most of the day and the petrels that raced by at intervals, the gannets which acted like gulls at times and the fulmars and gulls.
Sunday.

The following day we started at a slightly more civilised hour, 0930. The core people were the same as yesterday with one or two new ones. The sea was like a millpond with almost no wind at all. Wind is essential to carry the smell of the chum to the birds. It wasn't looking good. We saw a colony of shag and another of terns on the way out to sea. Then a group of ten or so Manx shearwater flew off at our approach. 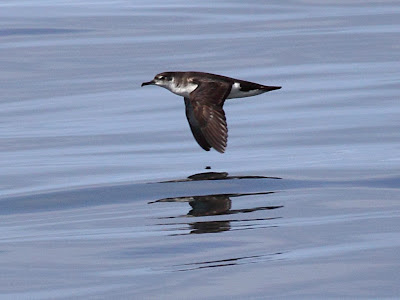 A little further out near the Seven Stones Reef we saw a single puffin, not in breeding plumage and looking rather monochrome. As we approached he took off, racing along the surface of the water to get airbourne on those impossibly small wings. It's a wonder they can fly at all! 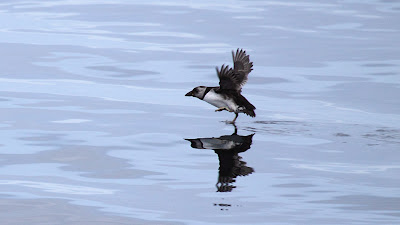 We pressed on and were rewarded by a magnificent Balearic shearwater, a very handsome bird. It, or another, came back time and again. This shot was very pleasing with the reflection of the gliding bird in the smooth surface of the sea. 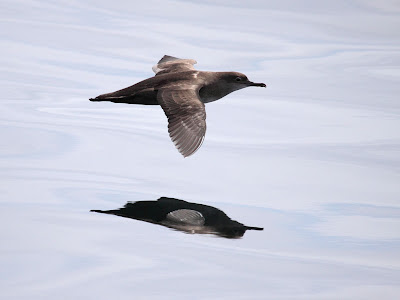 Sometimes it jumped in with the other birds, showing no sign of being intimidated by the much larger gulls. 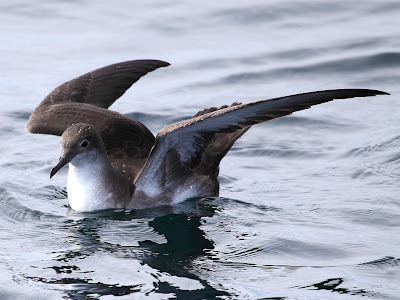 The rest of the day was taken up with fishing, taking endless shots of the petrels which came in, hoping to get one or two decent shots from dozens of hopelessly out of focus ones!!

About lunchtime there was a bite on the shark line and the skipper spent at least 10 minutes reeling in a blue shark. In fact, the hook had caught the shark in the tail. After tagging the shark and removing the hook it was thrown back into the sea.

The line was set again and it wasn't too long before there was another bite. The skipper asked any of the birdwatchers if they wanted to reel the shark in. One of them volunteered and spent an exhausting 15 minutes reeling in another blue shark, which was even larger. After tagging it and throwing it back in we slowly motored back to the harbour. I had a look at some of my photos before dinner.

The following day I was bumped off my helicopter flight, missed my train, had to buy another ticket (£82 single!) and eventually got home much later than expected. But, hey, I got seven year-ticks out of the trip and six of them were lifers!!

Posted by Phil Wallace at 23:13 No comments: Links to this post 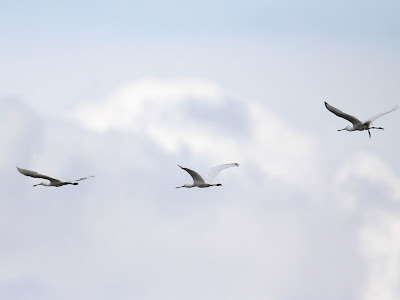 I'm only working a four day week next week. I'm off on Friday to go to the Scillies for a pelagic boat trip to see seabirds, the sort that don't normally come ashore much. I'm hoping to increase my year list to re-take the lead from David. He's 3 ahead of me now. I'm on 209. He's on 212. Grrrrr! No, of course I'm not overly competitive!!
Posted by Phil Wallace at 21:03 No comments: Links to this post

Went to London Wetlands today to see the juvenile purple heron. It was rather elusive at first but it finally came out into the open. A lifer for me. 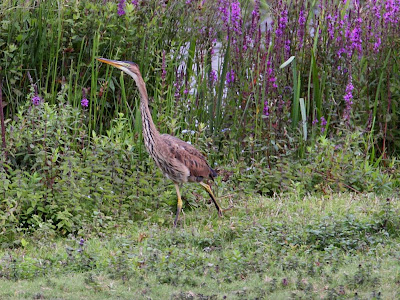 There were also three wood sandpipers. Also lifers. My year list is on 209 so far.
Posted by Phil Wallace at 18:44 2 comments: Links to this post