Birds seen while skiing in France

My week in France in February 2009 was not intended to be anything birdy, but the Alps came up trumps with a few lifers. As soon as we arrived I saw two or three alpine accentors on the balcony. A first for me but they turned out to be very common. At first they look like dunnocks, but when you see them first hand, you notice the rufous flanks, the distinctive bib and the much more marked back and sides. Altogether a much more handsome bird than a dunnock. These differences do not always come out in the field guides. 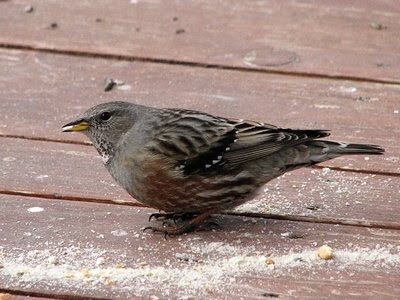 A trip to Tignes would assure us of some snow buntings according to our host. The 'snow buntings' turned out to be much larger than expected and the colouration wasn't right at all. These were no snow buntings! I took a few photos with my wife's Canon point-and-shoot so I could look at them later. I wish I'd had my camera but it is heavier and, after all, this was a skiing holiday, right? Also I had no binoculars or scope.

After our refreshment stop I noticed two large black birds on the roof of the restaurant. Closer inspection showed they had yellow decurved bills, so they were alpine choughs. Thank goodness for the large image magnification on the camera to see such details as the bill. I still haven't seen the 'normal' chough with the red bill, which are rarer! 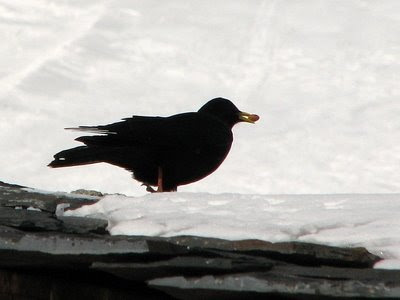 Back at the chalet, the 'snow buntings' turned out to be snow finches, as my friend, David Campbell, had correctly guessed. Both the alpine chough and snow finch were lifers for me. 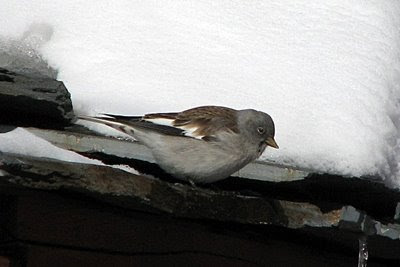 On the final day I went for a walk in the woods. I'd heard there were crested tits about but the first nice surprise was some treecreepers which were surprisingly tame. I hoped they might be short toed treecreepers but I can't really tell. Any experts at telling these two species apart are very welcome to comment on this photo. I thought that the slightly creamy belly and the slightly more marked white wing bar might be distinctive. 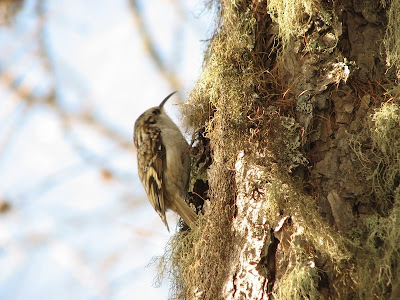 Just as the light was fading the crested tits appeared (another lifer). They were not so tame however and I managed to get only one distant record shot before having to go back to finish my packing before leaving for the return trip, ten hours overnight on the Eurostar, not good even First Class! 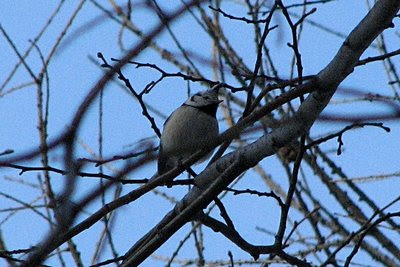 Anyway, four lifers on a non birdwatching trip without binoculars, telescope or my digital SLR is not a bad haul.
Posted by Phil Wallace at 21:47 4 comments:

Green woodpecker digging up my garden.

Yesterday, I went to Canons Farm and Banstead Woods with David Campbell. He was hoping to see marsh tit and brambling. I was just hoping to see anything in the snow which is stopping most birds from feeding on the ground. We didn't see either species but we did see treecreeper, nuthatch, skylark and little owl, all four are year ticks for me (125 for the year). I took some shots of the little owl and used both my 1.4x and 2x converters to get closer. I regretted it later when I looked at the photos on my computer. They were not very good at all. This photo was taken using only the 1.4x. 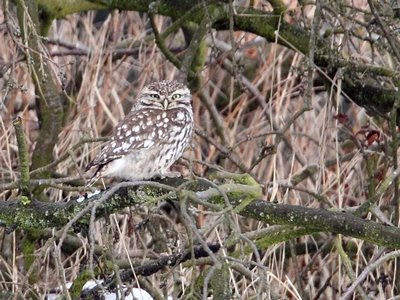 When I got in I noticed a green woodpecker under the large branch which had broken off the pine tree under the weight of snow, 30cm in one day. He was digging up the lawn looking for something to eat. I got my camera and took some shots through the double glazing. They weren't bad as record shots, but I was then able to open the window and take some straight views. These came out rather better. 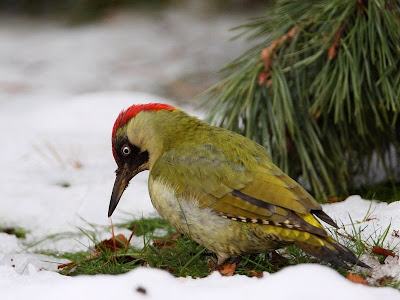 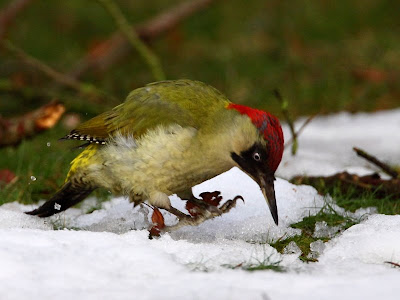 Green woodpecker has seen something to jump about!

This morning, Sunday 8 February, I went briefly to Bookham common to see the hawfinches which are usually to be found. I stopped to photograph some redwing at Great Bookham, arriving late at the Common, where the hawfinches had already been seen. I had to leave at 12.45 as we were going to lunch with the neighbours and Lynne had told me I had better be home by 1.20! I was leaving to go back to the car when someone said there was a hawfinch in a distant tree. It really was distant and against the bright sun of this lovely morning. I quickly took a few pictures before it flew off and then left. I just made it home in time. The pictures are recognisable as a hawfinch but much worse than last time's record shot (see 27 December 2008 post). So bad that I can't publish it here. I just managed to get home in time not to incur my wife's displeasure!!!
Posted by Phil Wallace at 18:12 1 comment:

On 4 January I decided to do a Kent round trip to start me off for this year. First stop was Folkestone to see the waxwings. I left in the dark and arrived at the retail estate well before nine. I quickly saw the waxwings and took a record shot, noting several more common birds before moving on to West Hythe for the night heron. It was there, and notable other sightings were kingfisher, goldcrest and kestrel making 19 species by 9.00. Shortly afterwards I saw green and great spotted woodpecker, redwing and snipe to total 37 by 10.00.

The road to Dungeness brought long tailed tits, marsh harrier, golden plover, red-legged partridge and curlew, but my total rose to only 43 by 11.00.

At Dungeness there were many waterbirds, notably goosander, red-breasted merganser, pintail, greenshank, smew, red crested pochard and bittern. By 13.15 I was on 64. On to the fields north of Lydd where, on 1 January, Josh Jenkins-Shaw had seen many geese. I saw only greylags so on to Scotney Pits. In the fields on the way were several Bewick's and whooper swans. At Scotney itself I was rewarded with a single bean goose and c.35 white fronted geese, several scaup, a flock of barnacle geese (don't say it, David), stonechat and, at Jury's Gap some turnstone.

My total for the day stood at 75 and the light was beginning to go. A man I'd met told me of the long-staying long-tailed duck at Lydd-on-sea so I decided I would risk it. The light was fading as I arrived and I was expecting to have to pick out the duck against the setting sun at the far Southern end of the lake. As it happened the sun had already set and the duck was at the Northern end of the lake not too far away. I quickly saw it in the scope but when I looked with the camera to take a record shot the scene in the viewfinder was much darker, and it took some time between discounting the tufted ducks and waiting for the long-tailed duck to surface again after frequent dives before I was able to get a picture.

A large flock of rooosting oystercatchers brought my total for the day to 77; not bad for a short winter's day. A good start to the year.
Posted by Phil Wallace at 12:21 1 comment: