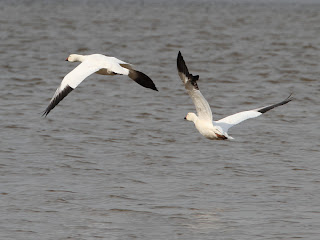 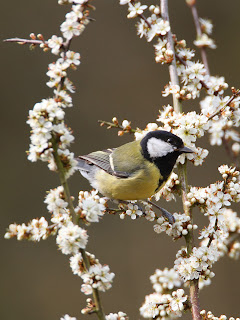 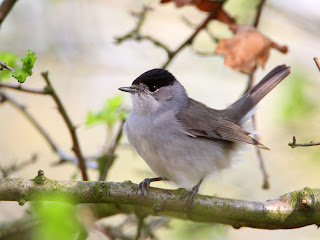 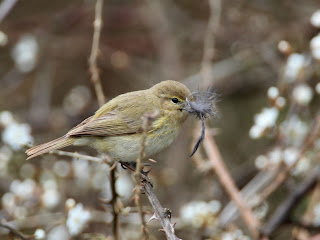 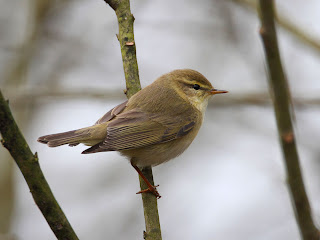 
If these two birds look almost identical it's because they are, almost identical. Telling them apart by song is easy. However, other features are the length of the wings and the leg colour. The wings of the chiffchaff are generally shorter. You can see from the pictures above that the wings of the willow warbler extend further back than the chiffchaff. Also, the legs of the chiffchaff are darker than those of a willow warbler.
The crane didn't reappear that afternoon, but I didn't mind after the lovely birds I'd seen.
Posted by Phil Wallace at 22:12 4 comments: Links to this post

On Friday, 9 April, I went with David to Rainham. We went first to Ingrebourne Valley where a grasshopper warbler had been seen the previous day. The instructions were not precise and we had to walk all over the reserve to find the spot.


David found the bird which performed admirably for us, coming close and reeling from the middle of a nearby bush. It was very mobile however and neither of us managed to get a shot. This was a good start to a day which, on the whole, was rather disappointing. Nothing further of note was seen despite trips to Minster (didn't see ring ouzel) and Elmley marshes. At Elmley, however, the drive from the road to the car park was pleasant with views of about 100 curlews, a brown hare, several lapwings, redshank and other common birds. The Spring influx seems to be late this year. 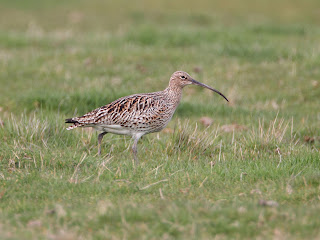 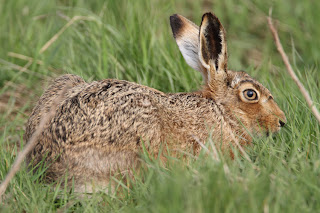 Brown hare.
(David took this photo)
Posted by Phil Wallace at 21:50 No comments: Links to this post

This weekend wasn't one of the best weatherwise, admit it. I'd done nothing all weekend and on Easter Sunday my nine year-old niece was to be baptised at Rainham church. I duly put on my best bib and tucker. The service was nice and the lunch was relaxing. Afterwards, I took Lynne to see her other sister and I sloped off to Chafford Hundred, just on the other side of Lakeside to see if I could find the Alpine Swift that was reported late yesterday. I'd not been there before but I got to the right place at about 3.45 pm. and there was one other birdwatcher there. The swift, of course had just been there, but it had just disappeared! The chap told me that the others had just gone to Rainham because a hoopoe had been reported and Ranham closed at 5pm. We agreed it would be best to go to Rainham before it closed.

At 4.10 I arrived at Rainham. Through the telescope the staff showed me where the group watching the hoopoe was. It was about as far from the centre as you can imagine. For those of you who don't know Rainham that is about 3km or 1.5 miles. I didn't think I could get there and back by 5pm. She said "You can if you're quick!"

I raced off with a few others and we arrived, hot and bothered on the other side of the reserve. The group started moving off at that point. The hoopoe had just flown. Ohh, nooo!! It was quickly re-located on a wooden fence behind a metal fence. I soon got it in my scope and fired off a few shots.

It was a British tick for me. It was quite distant and I decided to go back for the swift straight away. I got back to the RSPB centre just before five.

No sooner had I arrived back at Chafford Hundred than the alpine swift reappeared. It was showing well but it took some time to get the focus right on my camera. Autofocus is useless with a small bird flying high and at speed. I prefocussed roughly and then followed it while I tweaked the focus ring before firing off a few frames. Some of them came out. Another British tick and a life tick too! There were also some sand martins and swallows about.

I thought I'd better get back to Lynne, but I was pleased at two British ticks in a couple of hours.

David Campbell had rung to tell me of a ferruginous duck at Holmthorpe but I coudn't get back in time for it. I went this morning (Monday) but it wasn't there. I missed another British tick there.
Posted by Phil Wallace at 17:58 1 comment: Links to this post 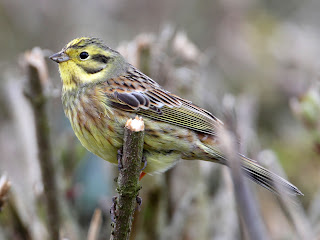 
It was getting late. Although it was a two hour drive, I decided to go for the lesser kestrel at Minsmere RSPB, where Nick, local birder, had already been this morning and seen it. About half an hour into the jouney, it started to rain and it didn't stop. It was raining when I arrived and the lesser kestrel hadn't been since it had started to rain at about 3pm. I stayed only 10 minutes. After checking the forecast was rain for the rest of the day, I decided to call it a day and go home. With the red kite, ring-necked duck and two-bar crossbill I ended March on 147.
Posted by Phil Wallace at 00:09 4 comments: Links to this post

Last week I went with Tricia to Painshill Park hoping to see a kingfisher. Spring was in the air with most birds dancing and making eyes at their partners or prospective partners. We didn't see a kingfisher where Tricia had seen them before but we did see two mute swans mating. The poor female was pushed right under until the male chivalrously pulled her head above water with his bill!! 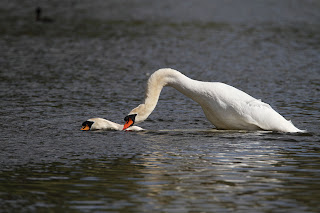 
We also saw two nuthatches inspecting a very tasty and promising hole in a tree with a 'to let' sign outside. It looked as though they were going to take it. 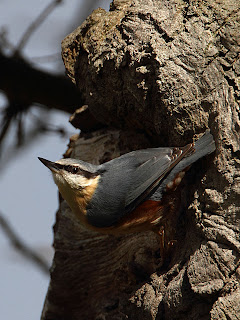 Nuthatch.  Let's see how much room there is in here.


The terrapin was out enjoying the odd sunny interval as we were. 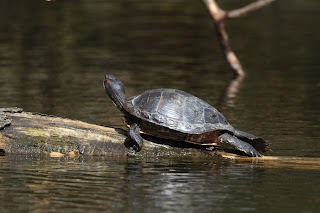 I love the sunlight. Terrapin.


After most of a circuit we repaired to the tea room for lunch and to warm up. The rain had mainly kept off during the morning. after lunch we went back to the river where a tree creeper flashed silently to a nearby tree on the far bank. Then Tricia saw the tuquoise flash of a kinfisher and we watched it disappear round the bend of the river. Well, at least we saw it. Thanks, Tricia for showing me round.
Posted by Phil Wallace at 23:10 No comments: Links to this post